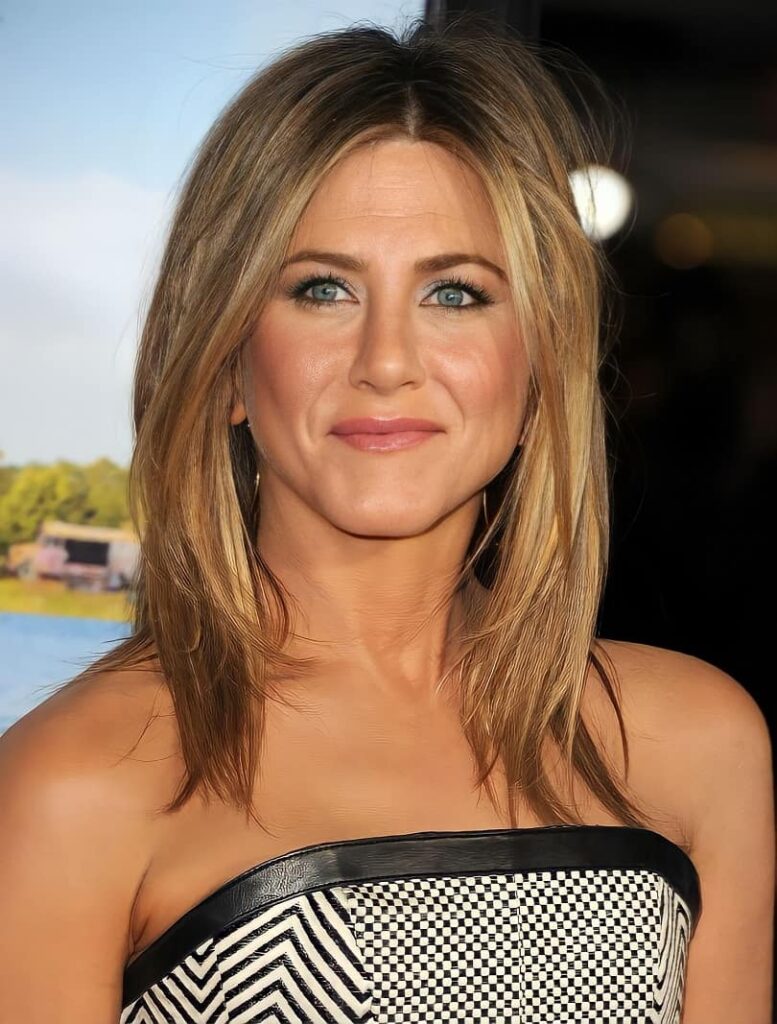 Jennifer Aniston is a popular American television actress, businesswoman, film producer, and philanthropist, she is well-known for her role as Rachel Green in the sitcom “Friends”. Her real name is Jennifer Joanna Aniston.

She began her acting career in 1988, by working in the production of ‘off-Broadway’ which is related to the shows, ‘Dancing on Checker’s Grave,’ and ‘For Dear Life.’ She began working as a waitress in restaurants, telemarketing, and as a bike messenger for a day to supplement her income. she appeared in the Mac and Me adventure film as an uncredited minor character.

Jennifer began her television career in 1990, by appearing in the American sitcom ‘Molloy,’ which aired on Fox from July 25, 1990, to August 29, 1990. She appeared in the ‘Ferris Buller,’ a brief television series that aired on NBC, on August 23, 1990. Apart from that, she acted in different serials like ‘Mudding Through,’ and ‘The Edge’.

In the year 1993, she started her career in film, by making a debut in the horror film ‘Leprechaun,’ but it remains unsuccessful. she got a significant breakthrough in her life for the role played in, ‘Friends,’ a sitcom that was aired on NBC from September 22, 1994, to May 6, 2004.

Jennifer participated in a number of advertisements and became a brand ambassador for several well-known firms. She featured in a variety of music videos, including ‘Walls’ and ‘I Want to Be in Love.’

Jennifer’s business career began on November 2, 2001, as a co-founder of the film production firm “Plan B Entertainment” with her ex-husband Brad Pitt and Brad Grey, and soon she divorced Brad Pitt in 2005, her stakes were surrendered to the firm. In April 2008, she collaborated with Kristin Hahn and founded a film production company called “Echo Film.” Apart from that, She is co-owner of the hair care company, “Living Proof.”

She signed a contract for one year with a major American cosmetics, skincare, and fragrance company “Elizabeth Arden Inc” and launched a new perfume ‘Jennifer Aniston’. Apart from that, she has two perfumes to her credit; ‘J,’ and ‘Near Dusk.’

She is involved in the activities of Philanthropic works and contributed to various firms like Friends of Al Faro, AmeriCares, Doctors without Borders, OmniPeace, Clothes Off Our Back, Feeding America, EB Medical Research Foundation, and Rape, Project A.L.S, Abuse & Incest National Network. She even contributed to Gays, Lesbians, Bisexuals, and Transgenders for promoting equal rights. In 2008, she made the ‘Stand Up to Cancer Show’ successful by hosting it, and in the same year she starred and directed a video with her co-star Woody Harrelson in the free Burma Campaign for ‘It Can’t-Wait.’

Her Journey to the Awards for her Achievements started in 2002, as an “Outstanding Lead Actress in a Comedy Series” for working in the sitcom “Friends.” In 2003, she was the winner of the “Golden Globe Award” in the category of ‘Best Actress – Television Series Musical or Comedy.’ Jennifer was awarded the “GLAAD Vanguard Award” by the LGBT people for his role in promoting equality rights. In 2015, she was awarded by the “Capri Hollywood Film Festival” in the category of ‘Best Actress Award for the character ‘Cake’. Even she has acquired many awards.

If we speak about her health condition, Jennifer was suffering from low self-esteem and was diagnosed with Dyslexia, The diagnosis benefited Jennifer in recognizing her problem. She rapidly overcame all of her challenges. The scenario to enter a swimming pool was the shot approved after 30 takes and that made her suffer from water phobia.

Jennifer Aniston’s age is 53 years in 2022. She was on Tuesday, February 11, 1969, in Los Angeles, CA. Aquarius is her zodiac sign. If we speak about her Ethnicity, her father is Greek American and her mother is Italian American. She follows the Christian faith and holds American Nationality.

She started education initially in Elementary School, and her family migrated to New York, she began attending Waldorf School at the age of six, and graduated from Manhattan’s Fiorello H. LaGuardia High School in Music, Art, and Performing Arts.

Jennifer Aniston’s father, John Aniston, is a popular actor and her mother, Nancy Dow, was a famous Actress, who passed away on May 25, 2016. Her parents got divorced when she was six years old. Apart from that, she has two siblings, an elder brother John T. Melick is a famous American actor and she has a half-brother from her father’s side, Alex Aniston, who is an Actor, Screenwriter, Director, Musician, and Producer.

In 1995, she started dating Adam Duritz, and the relationship did not exist for a long period of time as they broke up in that year, he is a well-known American singer, songwriter, film producer, and record producer.

In the same year, she started dating Tate Donovan, and the relationship ended up in 1998. Tate is a famous TV Actor and is better known for his role as “Tom Shayes” in the drama.

Jennifer Aniston got into a relationship with Brad Pitt and got married on July 29, 2000. On October 2, 2005, the couple announced a marriage break-up and got separated.

She dated Vince Vaughn at the end of the year 2005, he is a well-known American actor, and best known for playing a character in the film ‘Swingers’ as ‘Trent Walker,’ and they got separated in the year 2006.

She started dating Paul Sculfor, a famous British model in 2007, and the romance between them was short-lived, and separated within a year

Jennifer was in a relationship with famous British Rock Singer, John Mayer from 2008 to 2009.

The couple Jennifer Aniston and Justin Theroux started dating in May 2011. Apart from that, Justin is a famous actor, and better known for his outstanding performance in the movie American Psycho. The duo engaged on August 10, 2012, and married on August 5, 2015, after three years of marriage. They separated in 2018.

She got into multiple relationships throughout her life, and right now, Jennifer’s relationship status is single.

Jennifer Aniston stands tall at 5 feet and 5 inches of height with a controlled weight of 58 Kg. She has a good and maintained body figure with measurements of 34-23-35, including 7.5 (US) shoe size. Her pretty blonde hair and stunning blue eyes enhance her appearance.

By 2022, Jennifer Aniston has an estimated net worth of nearly $300 million, She gains revenue from her Acting, Film Producing, and Business.